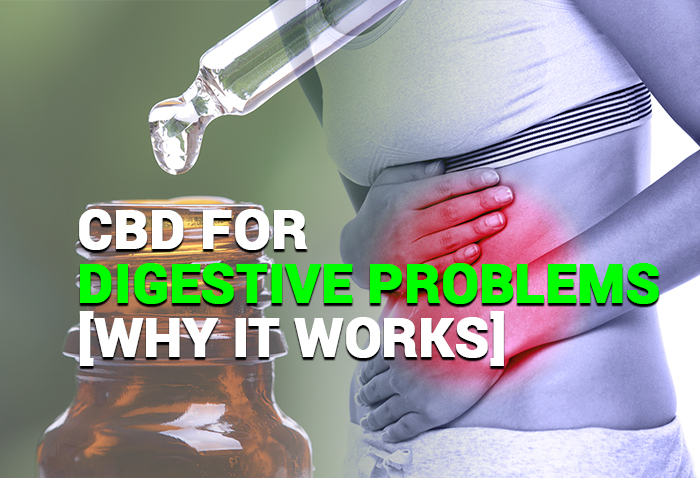 Digestive disorders are some of the acute complications that prevent us from going about our daily activities as usual, though many of them usually last for a short period. However, some of the disorders such as Crohn’s, IBS, and IBD are long lasting. Thus, they might force you to experience symptoms of a chronic digestion condition every day. With such a complication, there is a great need for a safe and effective medicinal or medical solution.

Usually, the medical solution should help treat the symptoms of the condition without causing any undesirable side effects. Fortunately, the latest advancements in medicine have made disease management extremely possible, but it is hard to avoid side effects. Apart from modern medicine, these side effects mainly come about due to the nature of treatment, such as steroids and surgeries.

The recent study has revealed that (CBD) Cannabidiol can help relieve digestive disorders. As you may know, CBD is less risky and has limited side effects since it is a natural compound that is found in the cannabis plant. For instance, several animal studies and relevant clinical reviews show that CBD offers a more favorable side effect profile than other drugs used in treating psychotic and epileptic conditions.

Crohn’s is a severe and chronic IBD (inflammatory bowel disease), which leads to weight loss, malnutrition, fatigue, diarrhea, and abdominal pain. However, the real cause of the disease has not been identified clinically, but it potentially results when inflammation is triggered by an abnormal immune system response. There other theories that suggest that genes, diet, and environmental condition play a key role in causing the disease, but some bacteria in the intestine could also be responsible.

Unfortunately, there is no known cure yet for Crohn’s disease, but the progression of this condition can be regulated by using immunosuppressant and steroids. Crohn’s treatment involves minimizing treatment’s side effects, inducing and maintaining remission and enhancing the quality of life of the patient.

However, even with the treatment plan, the conventional treatments might lead to some minor side effects such as insomnia, puffy face, weight gain, and hyperactivity. Conventional treatments may also result in severe side effects, including glaucoma, high blood sugar, cataracts, osteoporosis, and high blood pressure, which could be problematic. Therefore, the potential of cannabis in the treatment of the bowel disease must be good news all the patients and the medical fraternity. CBD does not only help in improving symptoms but also minimizing side effects.

Clinical Studies on People and Animals

So far, the animal studies on the effects of CBD and THC on the gastrointestinal system have provided encouraging results. For example, a study on 30 patients with bowel disease in Israel who were required to smoke marijuana was used to reveal the effects of the compounds. The researchers then asked them about the severity of the symptoms of the disease, reasons for using marijuana and medical treatments. After that, the researchers compared the results of the study with the medical documentation from the hospital to have an objective assessment of the severity of the disease.

With the comparison, the researchers were able to determine that all the 30 patients reported that cannabis had a positive effect on the severity of the disease, and 21 of them reported a great improvement in symptoms. Most importantly, many of the patients admitted that they required fewer conventional medications while using cannabis, while 9 said that they stopped using drugs altogether.

Gastrointestinal issues can be frustrating and interfere with your personal life and daily activities. In recent years, the management of digestive problems with the use of cannabinoids has increasingly become popular. Studies have also shown that cannabinoid therapies can effectively regulate the symptoms by helping the gastrointestinal system CB1 receptors. Some of the signs that they can help regulate include pain, nausea, and vomiting. Apart from these symptoms, CB1 receptors in the body help control stomach secretions, GI movement, cell production, and food intake.

Usually, 11 percent of the GI disorders and Visceral can be a form of stomach pain that is not related to IBS (irritable bowel syndrome) or any ulcers but causes other symptoms such as constipation and flatulence. Research has also revealed that cannabinoids offer a stimulating effect on TRPV1, CB1 and CB2 receptors, which helps in alleviating pain, decreasing abdominal movement, thus less diarrhea.

Usually, common symptoms of gastroenteritis, vomiting and nausea, motion sickness, psychological illnesses, and emotional stress, as well as other conditions resulting from the stimulation of certain receptors in the brain. These receptors bind with the signaling molecules like cannabinoids, dopamine, and serotonin. Studies found that individuals who experienced vomiting and nausea had lower CB1 and endocannabinoids levels as compared to those who did not experience these symptoms.

10 Best Marijuana Strains for Back Pain