"> EVERYTHING YOU NEED TO KNOW ABOUT TERPENES OF CANNABIS – MedCare Farms 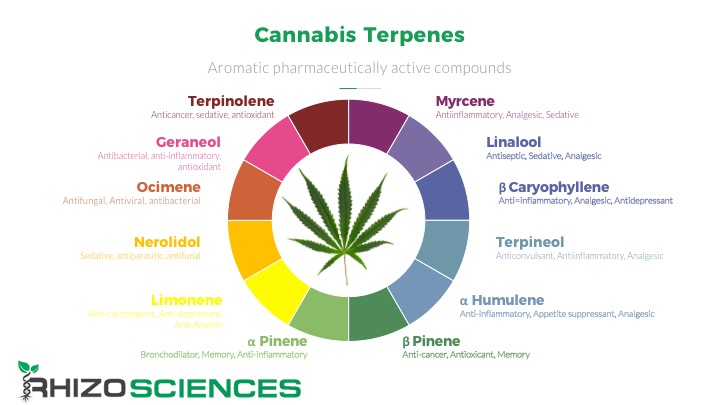 FACTS ABOUT TERPENES OF CANNABIS

The term “Terpenes” or “Terpene” might not mean anything to many people for now, but that is bound to change soon. Terpenes are compounds found in cannabis plant that gives its flavor and fragrance. This explains why every cannabis plant has a unique flavor and aroma. According to studies, there are more than 100 different strains of Terpenes, which have already been identified in the plant and each has its unique composition.

As we continue to get a better understanding of this mysterious plant due to the advanced science and technology, we are able to see that industrial hemp and marijuana offer more than just cannabinoid content. Consequently, you do not need to smoke or take it to enjoy its health benefits as even smelling it alone will enable you to experience the therapeutic properties offered by Terpenes.

Here we look at all your what you would like to know about these compounds. For instance, can they be purchased separately, what properties do they possess?

Terpenes are formed when hydrogen and carbon atoms combine, thus they are organic hydrocarbon compounds. When it comes to cannabis, the compounds are synthesized in the Glandular Trichome by the secreting cells. The production of Terpenes in cannabis increases when the plant is exposed to much light. Besides, Terpenes mainly accumulate in the exuded resin just like the other cannabinoids.

Functions of Terpenes in the Plant and Human Body

As mentioned above, Terpenes are usually found in the cannabis flowers, which are mainly female plants that are yet to be pollinated. The aromatic Terpenes protect the plant from various threats including insects, fungi, and bacteria. Apart from protecting the plant, their aroma also helps in pollination by attracting insects.

A number of factors usually influence the production and the quality of the compounds. Some of the critical factors that affect the quality of Terpenes include the genetics of the strain, soil composition, growing conditions and also the time of the day when harvesting is done. Therefore, it is advisable to understand that growing conditions and other factors affect the quality and consequently the effects that Terpenes will have on your body. Lab testing is the most reliable way to determine the level of Terpene, though growers claim that they can do it by using their noses.

Consequently, every plant has unique composition of Terpene even though the aroma and flavor of plants with the same genetics and variety tend to be similar. Studies have also revealed that Terpenes affects the cannabinoid production since cannabinoids are made up of phenol groups and Terpenes. According to research, there is a great correlation between cannabinoids and Terpenes levels under standard growing conditions. The study concluded that the correlation occurred because both compounds are manufactured in the same Glandular Trichome’s.

Just like Cannabinoids such as THC and CBD, Terpenes offers numerous health benefits, which are discussed done here. Terpenes and cannabinoids have different effects though they bind to the CB1 Receptors in the central nervous system of the brain. Besides, every Terpene has a distinct effect. For example, Limonene helps elevate your mood while Linalool has a calming and relaxing effect.

It is also important to mention that heating Terpenes above the boiling point can severely damage the beneficial qualities of these compounds. Therefore, if you decide to consume it through vaping, it is advisable to use a low heat vaporizer pen for maximum benefits.

How is Terpene Extracted?

Terpene is extracted through steam distillation, where the vapor (steam) is passed through the plant material and comes out with Terpenes. The aromatic oil mixes easily with steam since Terpenes are soluble in water. On the other hand, cannabinoids do not mix with steam as they are fat-soluble and thus they are left in the plant material, which helps in separating the two compounds. Unlike some cannabinoids such as THC, Terpenes oil is free of psychoactive properties.

The extractions come at a relatively high price and can only be marketed in small quantities, which makes them incredibly valuable. Terpene oil is used in numerous applications such as being added to lotions, creams and massage oils in Aromatherapy. Besides, it can also be used in dabs and e-liquids as it provides a delicious aroma and flavor.

As mentioned earlier, there are 100 different strains of Terpenes. Here we look at the common ones:

This is among the major Terpenes in cannabis, but it is also found in lemongrass, hops, mango, and thyme. Myrcene has the aroma of cloves and cardamom, which is earthy and musky. The Terpene offers an ‘indica like’ calmness as it has a sedating effect. Therefore, it helps in the treatment of inflation, pain, insomnia and it is a potent antioxidant.

According to studies, taking a mango before consuming cannabis may accentuate the psychoactive effect since mangoes contain high myrcene levels that are synergistic with THC.

A-Pinene is another common Terpene strain that is found in rosemary, parsley, pine needles, and has the aroma of pine. The compound offers several effects including memory retention and alertness. It also aids in relieving pain, Asthma, anxiety, ulcers, and inflammation.

This compound is found in various cannabis strains. However, it is also found in a tree in Brazil known as Candeia and in chamomile. Bisabolol offers several health benefits as it acts as an anti-irritant, anti-inflammatory, analgesic and antimicrobial.

With the numerous health benefits, the strain has become a subject of research recently, and it is also widely used in cosmetics.

This strain o Terpene is found in cloves, cinnamon, and black pepper and it has spicy cloves and pepper aroma. Caryophyllene offers many medical benefits as it can be used in relieving pain, anti-inflammatory, depression, anxiety, and ulcers. Therefore, the Terpene is often found in anti-inflammatory salves and topical.

Humulene is another common Terpene that also has several health benefits as it can be used as an antibacterial, antitumor, anti-inflammatory and also in suppressing appetite. Therefore, the Terpene is ideal for those who want to lose weight. The strain is found in coriander, basil, hops, and cloves and has an aroma of cloves, and hops.

This compound is also found in a number of plants including conifers, nutmeg, apples, lilacs and cumin and has a lilac, piney and flower blossom aroma. Terpineol can be used as an antibacterial, sedative, antioxidant, anti-cancer and antifungal and has a calming and relaxing effect.

With a woody and sweet herb aroma, Ocimene is found in parsley, pepper, mint, kumquats, basil, orchids and mango. Its medical benefits and can be used as anti-fungal, decongestant, antiseptic, anti-bacterial and anti-viral.

Can Using Weed Help with PTSD?