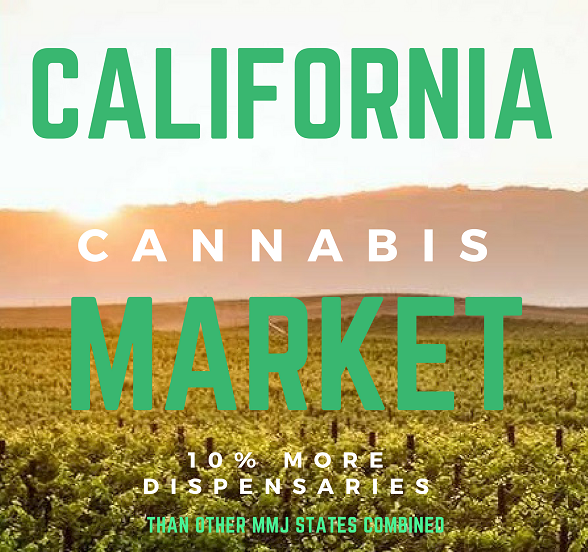 The governor of California, Gavin Newsom played a very key role in the legalization of marijuana for recreational use in this state before his election as the governor. He now faces a daunting task of trying to fix the system as he settles into the office to ensure that the industry blossoms.

With the sluggish growth in some state-licensed cannabis businesses, the governor has urged patience while saying that he expected that the system would take at least 5 years to develop fully due to its complexity.

However, according to a recent report on the first year of legal cannabis in California from the Cannabis Advisory Committee has revealed that there is an issue that needs to be addressed urgently. The uncoordinated and fragmented enforcement has favored the flourishing of the black market, thus posing a significant threat to licensed businesses due to unfair competition.

A report by the 22-member panel that was appointed by Jerry Brown (the former governor) revealed that lack of enforcement favored the unregulated underground market by creating a thriving environment.

Newsom announced last week that the California National Guard would put more efforts and work with the federal agents to fight black market. These include illegal drug grows in the Northern part of the state, which is owned by international drug cartels.

“In Northern California particularly, there are legitimate concerns that related to illegal cannabis grows, which are getting worse day by day,” Newsom clarified.

According to the governor, the state would redeploy at least 150 California National Guard troops from the US-Mexico border to team up with the federal Counterdrug Task Force. He further clarified that the new forces would solely focus on illegal cannabis activity in Northern California.

Recently, Newsom said that he would seriously address the threat posed by the black market through an approach that would ‘move expeditiously at ensuring that more and more dispensaries are licensed while also targeting the bad actors in the industry.’

Two days after the critical advisory committee report was released, Newsom told reports that he was committed to ensuring more enforcement.

According to the estimate by a firm that tracks cannabis trends and sales (the New Frontier Data), about 80% of the marijuana sold in the state of California comes from the black market. The analysts also determined the illicit market in California was valued at about $3.7 billion last year, which is four times the value of the legal market.

The state records and interviews with industry insiders and officials the state’s enforcement have been hampered by a number of issues, including lack of resources as well as a decision to give new firms enough time to deal with political disputes and comply with complex regulations.

The governor has stated his resolve in ensuring that the state-sanctioned marijuana industry flourishes a year after California began issuing licenses. While campaigning for the governor’s seat, Newsom chaired the Blue Ribbon Commission on Cannabis Policy. The commission’s recommendations led to Proposition 64, which was approved in 2006 by voters to make growing and selling cannabis for recreational purpose legal.

Consequently, the cannabis industry contributed more than $340,000 for his campaign for the state’s top spot. The cannabis industry is optimistic that the new administration will tackle some of the lingering issues, especially with the licensing system.

“We are optimistic that Newsom is committed to handling our concerns and he has the support of the legislature that has shown willingness to push bills that make the regulated market stronger while minimizing black market,” said California Cannabis Industry Association, Josh Drayton.

Surprisingly, the number of growers and sellers receiving state licenses is significantly less than what many people in the industry anticipated. According to experts, this is due to city bans on cannabis business, a result of high taxes as well as the large underground or unregulated market.

“In the past, the enforcement has been ineffective and expensive,” said the chairman of Emerald Grown, Hezekiah Allen. Emerald Grown is a cooperative of 130 cultivators that are state licensed. “If our state had a thriving and robust regulated market, then it is highly likely that enforcement might help. But we do not have it though.”

California has taken the right measures in eliminating unregulated market and making the industry favorable for state-licensed business. This is through the state Bureau of Cannabis Control, which has already sent out 2,842 to cannabis business and shops suspected to be unlicensed and most importantly licensed 634 pot retailers.

Moreover, the state regulators have also announced five enforcement measures that include cannabis seizures against businesses operating without licenses in Sacramento, Sylmar, Costa Mesa, and Fair Oaks. The latest development in implementing the state’s actions has led to 15 individuals face charges for breaking the state law.

According to Alex Traverso, State Bureau of Cannabis Control spokesperson, it is not yet clear how many illegal cannabis businesses have closed down after receiving the warnings.

“It is hard to determine the number of letters that resulted in action, such as businesses relocate or shut down,” said Traverso.

With the state bureau’s limited action, cities with strained resources have been forced to step in illicit operators.

Moreover, the state bureau wrote to a tech company and dispensary database Weedmaps, warning it to cease from advertising unlicensed sellers.

“Your website has advertisements from cannabis and cannabis products’ sellers that lack a permit to run commercial cannabis activity; thus, you are helping them violate state cannabis laws,” said Lori Ajax, the chief of state bureau in his letter.

Nevertheless, the firm escaped from any state punishment as they argued that it is a service firm such as Yelp, Craiglist, and Google, which means it is subject to “preemptive protections from the federal government.” Therefore, the state did not take any action on the firm.

Besides, the company’s spokesperson, Carl Fillichio stated that they would continue to engage in constructive discussion with both the local and state authorities.

But the state Bureau officials claim that their actions are limited.

“Weedmaps is not a licensee of the Bureau, which means that the issue is no longer in our hands,” said Traverso.

It is important to mention that other efforts to step up enforcement before Newsom got into power had failed, which included a bill that was meant to allow fines against firms or companies that advertised without a state license. The other bill that failed is the one by R-Palmdale (Assemblyman Tom Lackey), which would assign the California Highway Patrol the duty of enforcement.

Tom Lackey, a retired CHP sergeant believes the enforcement has been a joke. “Today, you have the locals and state blaming each other on who has the responsibility for enforcement.”

Most probably, a dispute between Brown and Democratic leaders in California’s assembly is the most significant setback for serious enforcement. Brown proposed to provide $14 million in his final budget, to create five enforcement teams with each team located in different parts in the state. The teams would investigate cannabis black market in California, while mainly targeting drug gangs and cartels. However, a dispute over how the program would be paid caused the negotiations to stall last year.

Last week the Governor sent a letter to Washington requesting the federal government to fund the expansion of the California National Guard’s role serving in the Counterdrug Task Force.

Newsom’s administration first budget for 2019-20 proposes that it will continue funding for enforcement at about $40 million; this is according to a spokesman for the state Department of Finance, H.D. Palmer.

Industry official also thinks that a lack of staff has hampered the enforcement efforts by the Bureau of Cannabis Control. So far, the bureau has only filled 77 of the total 147 budgeted positions. However, Traverso argued that the delay resulted from the agency decision to ensure that they hired the right people and went to downplay the effects of understaffing on enforcement.

The reports by the state advisory panel revealed that scattered enforcement responsibilities were another issue affecting the activity. Besides, cannabis growers are required to acquire a license from CDFA (California Department of Food and Agriculture), but the agency is only allowed to enforce rules with licensed cultivators.

The CDFA “has no statutory authority over illicit cannabis cultivation, thus we do not give citations to cannabis growers without licenses,” explained Rebecca Foree, the department’s spokeswoman.

The state Department of Justice teamed up with the local and federal authorities in order to raid and eradicate illegal cannabis grows before Proposition 64. However, the effort has faced many obstacles too.

Medical Marijuana Program In New Hampshire to be Expanded

The Beginner’s Guide to Buying Cannabis Extracts and Dabs