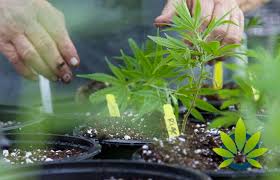 Compassionate Cultivation has focused on in-house breeding as a way to improve services to its patients and stand out from the competition. The cannabis industry continues to grow as the firms concentrate on consolidating the market, and as larger companies join the sector.

The integrated, Texas-based medical cannabis company introduced Brazos, which is its second original cultivar. It is named after river Brazos that divides West and East Texas. The cultivar was an in-house breed that was produced at the company’s facility in Manchaca, Texas. Brazos joins Waterloo, which is also an original type that Compassionate Cultivation brought last December.

According to Taylor Kirk, the company’s vice president of Operations, Brazos come with 20:1 CBD-to-THC ratio just like Waterloo. Brazos is a breed of two CBD-rich cultivars, which makes it a Type 3 cannabis plant with high CBD levels and low THC levels. Besides, the variety contains several terpenes with linalool being the dominant compound. Other terpenes available in significant concentrations include myrcene, limonene, and beta-caryophyllene.

“Brazos is a high-yielding plant that allows us to have more plants per space and increase the yield from our flower rooms,” said Kirk.

The company has placed its focus on the in-house breeding program, which is now picking up well, stated Kirk.

“As a licensed company, we have an interest in breeding our own cultivars and then using them for choosing the perfect chemovars for our patients within the state. Luckily, we had the opportunity to use breeding to do a lot of in-house since our markets have taken time to grow due to the state’s regulations in Texas. Thus, we have concentrated on ensuring that we offer the highest quality plants and products as well as genetics to work with.”

The company has a well set up in-house analytical lab that is used for analytical proceedings in plants’ sample testing, which in turn determines the ratio of CBD to THC, chemovar type, and overall potency. Compassionate Cultivation started every plant from regular seed stock. “This provides more robust offspring and offers our company with male plants to use for breeding,” said Kirk.

“The company uses regular seeds which are then sorted out to get the best male plants that are put in small groups that are later grown in the vegetation room,” he said. We then monitor the growth habits of the plants and take leave samples, which we use to determine the ratio of CBD to THC.”

After determining the ratio of CBD to THC, the company starts breeding another plant with a different terpenoid profile but the same ratio, which allow patients to enjoy a wide variety of choices. Finally, Compassionate Cultivation uses results from emerging research to target specific terpenoids and cannabinoids, he added.

Kirk added that the company chooses its best female and male plants, then puts them together to create a perfect hybrid. The new seed developed from the hybridization becomes the company’s unique cultivar. Compassionate Cultivation has a special breeding room that uses open pollution to allow male plants to grow naturally. The male plants release pollen that pollinates the female plant that produces that creates the seeds that they harvest.

Stands out from the competition

The company is committed to being a leader in all its ventures, and the desire is shown by the breeding program.

“It is rare to find producers engaging in large scale breeding,” he said. “There are very few companies out there that do what we are doing, which makes us stand out.”

The company will continue to source for genetics from the market for its breeding program. However, once they determine the type of plant and its favorite terpene profile, it will breed the genetics into its cultivars. With the focus on acquiring unique varieties, the company will have an intellectual property that is not available to its competitors.

Compassionate Cultivation will maintain an advantage over the new entrants in the market by patenting its plants over a given period, Kirk explained. We want to protect all our investments and have our own high-quality products to use for our work.”

He further added that the company has a plan to introduce a new, full-spectrum product line into the market soon. Besides, in the coming months, Compassionate Cultivation is also working on unveiling another new cultivar.

Earlier this year, the Texas Legislature voted on a bill that sought to expand the medical cannabis program in the state. The new development adds new qualifying conditions and removes the limit on CBD content in finished products.

“This offers new opportunities for us to start to develop new ratios in our products and also focus on breeding new plants,” he added.

The expansion of the state program is likely to lead to an influx of new patients into the company, which will interrupt us from our breeding efforts, he said. In the meantime, we are committed to breeding multiple types of cannabis to ensure our operation runs effectively and efficiently.

Platinum has Partnered with Neurotags and Label Impressions Inc. to Provide Businesses with Anti-counterfeit Solutions